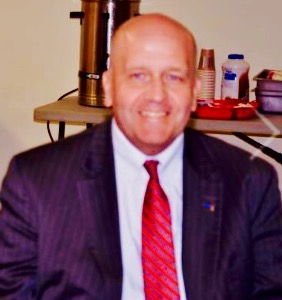 Michael J. Spellman (U) age 52 is a lifelong resident of Pawcatuck, educated in local schools. Spellman graduated from Stonington High School in the class of 1981. At SHS he was active in Student Government, several clubs and was a multi-sport Varsity letterman. In football he earned an honorable mention all-state slot as an Offensive Guard on the 1980 New Haven Register All State Team.

Spellman earned his Bachelors of Arts Degree at Central Connecticut State University in 1985, where he majored in Political Science/ Public Administration.

In 1987, Spellman graduated from the 96th Training Troop of The Connecticut State Police, having his badge pinned by Colonel Lester J. Forst. Spellman initially served at Troop E in Montville, where he was chosen as a Field Training Officer in 1990.

From 1991 to 1993 Spellman served as Resident State Trooper of East Lyme. Upon returning to Troop E after leaving East Lyme, Spellman earned MADD awards for DWI enforcement and education. In 1996 to 1998 he served as both the Court and Evidence Officer at Troop E prior to promotion to Detective and serving in the Eastern District Major Crime Criminal Investigative Unit at both Troop K and Troop E.

In 1999 Spellman was promoted to Sergeant and assigned to Troop D in Danielson. While at Troop D, Spellman was the original Supervising Sergeant of The Quality of Life Task Force and drafted protocols still used by the unit today. He served on The Windham County Community Partnership Team, and while working closely with the late Wendy Moher of The Women's Center of Northeast Connecticut, they facilitated multiagency training and cooperation to combat child sexual victimization. Spellman earned a Women's Center of NECT Connecticut Sexual Assault Crisis Center Distinguished Professional Award in 2001 for these efforts.

After service in the Connecticut State Police Internal Affairs Unit in Meriden, Spellman was promoted to Master Sergeant in 2006 and transferred back to Troop D as its Executive Officer. In 2007 Spellman was promoted to Lieutenant and named Commanding Officer of The Casino Unit handling primary law enforcement at both Foxwoods and Mohegan Sun Casinos. Spellman oversaw law enforcement preparation for the MGM expansion during his Casino Unit tenure. In 2008 Spellman earned a Troop Command at Troop K in Colchester. Here he commanded an operation of over 100 sworn and civilian employees while providing primary law enforcement for 11 municipalities, and for a population of over 100,000.

In 2010 Spellman was placed in command of Troop D in Danielson, and in 2011 transferred to Commanding Officer of Statewide Narcotics East where he served until he retired later that year. Spellman retired a heavily decorated Lieutenant earning life saving medals, five Outstanding Service Medals, and three Unit Citations.

Post retirement from the State Police, Spellman worked in the private sector as a  Security Safety and Operations consultant. He took an unusual career path, once again passing all entry tests including fitness testing and becoming a Patrolman with the Groton City Police Department in 2014, where he serves currently. After an elected Selectman resigned in 2014 Spellman accepted appointment and was elected to the Board in 2015.

Spellman is married to the former Heather Buffinton. They have two children, both currently in college, Michael age 22 and Hannah age 18.